In June 1999 the large barn at Fair Acre was to be furnished with a concrete floor. The concrete lorry arrived and mixed the concrete on site. We had worked with concrete before but had never used lime as an ingredient.

The concrete was wheelbarrowed into the barn and Anne spread it and smoothed it. The barn floor had a downhill gradient which meant that liquid oozed from the edge of the wet concrete. We thought that this clear liquid was merely water. Unfortunately, it was a corrosive lime solution which soaked into her clothing around the knees.

After finishing the floor, Anne went for a bath only to find that her trousers were stuck to her knees and legs. On removing her trousers, her skin came off her legs and remained attached to the trousers.

Fair was 50 miles away from the nearest hospital. By the time that she arrived at the hospital, the lime had burnt deeper into her legs.

The recovery from this injury took many months and she was left badly scarred. She was in a wheelchair for two months. The scarring meant that she had difficulty in bending her legs making walking and even standing very painful.

The concrete suppliers admitted that they were in breach of the Control of Substances Hazardous to Health Regulations 1994 (COSHH)  and also the Manual Handling Operations Regulations 1992. 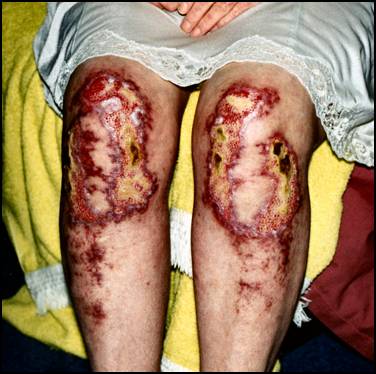